Earlier MtGox payouts? No thanks to CoinLab

The MtGox civil rehabilitation trustee recently submitted a draft rehabilitation plan for distributing the assets of MtGox. The plan is not final and is currently being reviewed by the Japanese court, following which it will also need to be voted on by all creditors, and after that the practical matters of registering for payouts needs to happen, so this does not mean payouts are imminent or that the trustee is about to dump coins on the market. This always has to be explicitly pointed out as some so-called journalists love spreading FUD about this for clicks.

I have followed the MtGox bankruptcy and civil rehabilitation process closely since its beginning, in addition to extensively investigating the MtGox collapse itself. While the rehabilitation plan is meant to be for creditor discussion only, I feel compelled to publicly counter some of the bad takes and outright lies and misinformation being spread on this topic. If you are a MtGox creditor, I’ll later be making a deeper dive into the proposal and what this means for creditors so check back again in the future.

Again, please remain calm and avoid spreading speculation. MtGox is an unprecedented complicated bankruptcy that requires significant care and effort to handle, but there are lots of very well-informed people that have been working hard on this for years, and random people jumping to conclusions and looking for negative interpretations does not help. And to the people intentionally spreading FUD and misinformation or putting an unfounded PR spin on this, please stop immediately, as you are doing lasting damage to what has been a long hard-fought battle for creditors.

It may be helpful to have a quick refresher on what we’ve gone through so far to get here.

Originally in early 2014 MtGox filed for civil rehabilitation (essentially bankruptcy protection), but this was soon overturned by petitions from creditors who felt MtGox could not be rehabilitated—and should not be trusted to rehabilitate itself—and the process was converted into bankruptcy proceedings. If you’ve been involved since the beginning, this is the processes in which you filed your initial claim.

MtGox is an unprecedented bankruptcy case, partly given the scale of its losses and the massive number of creditors involved, but first and foremost because the significant assets remaining. Most Japanese bankruptcies involve remaining assets adding up to only a tiny fraction of liabilities, often a fraction of a percent, but in the case of MtGox a whopping 200,000 BTC still remain thanks to having been kept in an old offline wallet, resulting in a 20–25% assets-to-liabilities ratio. This has resulted in a lot of head-scratching about how to accommodate creditors, given the rules are not written with this in mind.

As time went on, a major problem arose with the bankruptcy process: Japanese bankruptcy claims are by law denominated only in JPY, with BTC claims converted to JPY using the exchange rate at the start of the process. The actual bitcoin assets however had not been liquidated (by request of creditors) and kept appreciating in value and eventually overtook the book value of liabilities. This legally meant MtGox was “solvent” again, despite BTC creditors remaining just as unwhole in terms of BTC. Worse, Japanese bankruptcy law doesn’t allow paying out more than 100% of the book value of a claim, resulting in a bizarre “surplus” of the estate which—to add insult to injury—would end up being paid out to the shareholders of MtGox rather than to creditors.

Recognizing the absurdity of the above situation there was a lengthy lobbying effort by creditors to try to avoid this outcome, with the best outlook being offered by converting the bankruptcy back to civil rehabilitation, giving the trustee more flexibility and more importantly restarting the clock and revaluing claims according to more up-to-date market prices. The trustee and court were sympathetic and MtGox was successfully pushed back into civil rehabilitation in 2018.

As a tradeoff to make this possible though, a compromise was struck to guarantee that fiat claims—which were due to receive a true 100% payout under bankruptcy rules—would not be treated worse under civil rehabilitation, as otherwise they would have reason to object to the move. This also necessitated the liquidation of a certain amount of BTC (along with BCH, which didn’t exist yet when MtGox collapsed but that the trustee holds the same number of coins in as a result of the fork) in order to create a cash reserve to guarantee that fiat claims can be paid out at 100% regardless of what happens to the bitcoin market price.

The question of whether to preserve the MtGox BTC as BTC or whether to liquidate them and distribute them as JPY has been a long-standing issue and open question, with creditors largely preferring the trustee keep them and distribute them as BTC. Recognizing this, the trustee has thus far refrained from liquidating the bitcoins (aside from the coins described above) and is seemingly working to try to make BTC distribution possible. While good news for creditors, this also means breaking new ground and greatly complicating the distribution process compared to a standard bankruptcy or civil rehabilitation.

Lastly, one cannot fail to mention CoinLab, a former US company that engaged in a failed collaboration with MtGox in 2012–2013 and has since sued to claim billions of dollars from the estate, eclipsing all other claims combined, in an unabashedly arrogant entitlement fantasy of all the hypothetical revenue it would have made had it lived up to its part of the bargain and had MtGox not collapsed. The remaining assets in MtGox are the fraction of people’s savings that through sheer serendipity remained unstolen, and the people behind CoinLab are trying hard to finish the job.

Fortunately, the trustee rejected CoinLab’s claim and is currently fighting them in court. CoinLab is currently only claiming a smaller amount—Japan requires a fraction of your claim size as a security deposit to disincentivize these kinds of fantastical lawsuits—but they're threatening to go after the original 16 billion dollar claim if successful in their argument. (The trustee is counter-arguing that they procedurally can’t reinflate their claim like that.) 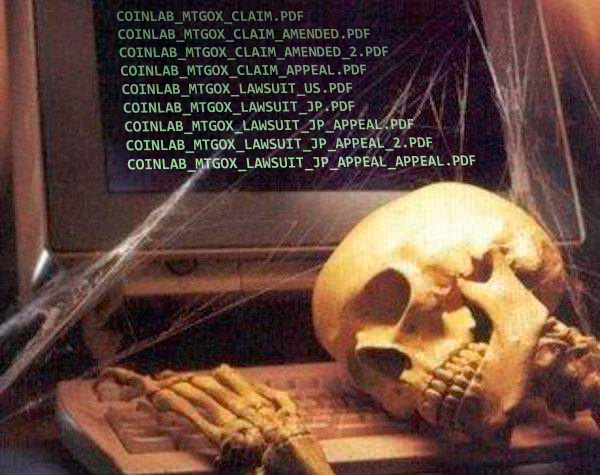 Despite the flimsy basis for their claim and the fact that they are shamelessly trying to re-rob MtGox victims, Peter Vessenes and the other people behind CoinLab seem hellbent on fighting tooth and nail over this, and the matter could end up being litigated for years to come. A previous court finding took a middle ground and awarded CoinLab millions of dollars in contractual damages, but none of the imaginary lost revenue they argued for, and CoinLab appealed.

The trustee’s attempts to put an upper cap on the amount CoinLab could theoretically win would be an important step to unblocking the remaining estate assets and enabling uncontested assets to be distributed to creditors.

As part of civil rehabilitation proceedings, the MtGox trustee proposes a rehabilitation plan detailing how the remaining assets will be distributed to creditors. We’ve previously seen draft outlines of this plan, but last month following new developments an updated version was submitted to the Japanese court for review. If approved by the court, this plan then needs to be voted on by all MtGox creditors, and if approved by a majority of votes (weighed by claim size) the process towards actual distribution can finally begin. Again, there’s still a long road ahead, and payouts are not imminent.

Without going into too much detail, there have been some misinformation and bad takes circulating around this latest proposal.

Some describe this as a “settlement” between CoinLab and the trustee or with other creditors. This is not true. CoinLab’s claim remains disputed—with the trustee’s opinion being that CoinLab should receive nothing—and will likely continue to be litigated for years.

CoinLab has not seen the error of their ways nor were they trying to do the right thing for MtGox creditors here, and should receive no such credit. If anything, CoinLab was still insisting on obstructing the process so not a single cent could be paid out to anyone until they finish litigating, and it took an outright bribe for them to agree to not stand in the way of this offer to creditors.

The actual offer being proposed, negotiated by Fortress/MGIF (a claims buyer and by now one of the largest creditors), is that rather than having to wait until the end of a process that will likely take several more years to complete (thanks to CoinLab’s actively ongoing sabotage), creditors will be able to instead opt for an early lump sum payment to settle their claim ahead of time.

Based on projections of likely final payouts, this early lump sum payment offer has been set as 21% of your claim size (as valued at the start of civil rehabilitation; the actual fiat/BTC amounts you'd end up receiving are subject to multiple additional steps and conversions, so this does not mean a flat 21% of your BTC claim).

Creditors who don’t opt for the early payout will stay on until the end and split the remaining assets normally, which is projected to be slightly higher (22–23%) if CoinLab’s claim is successfully struck down. This estimated difference between early and final payouts is where the “90% of your bitcoins” figure touted in the media comes from (21/23 ≈ 90%). However, should CoinLab ultimately succeed in its claim, remaining creditors will receive less.

At the end of the process, the payout percentage is calculated to what it should have been for everyone if the early payouts had not happened. If this number has fallen below 21%, say to 20%, the trustee effectively overpaid the early creditors and no longer has enough funds to even pay the 20% to all the remaining creditors. In this case, normal creditors will be prioritized and will receive the intended 20%, with the deficit instead being taken out of Fortress/MGIF's claim as well as CoinLab's claim if necessary. (Early creditors keep their 21%.)

As you can see, Fortress/MGIF not only had to bribe CoinLab to make this deal possible, but are also shouldering the primary risk from making these early payouts as large as possible. To make up for this risk, if CoinLab loses and the final payout percentage rises above 21%, the corresponding surplus from creditors who cashed out early will be paid out to Fortress/MGIF as consideration. (Early creditors keep their 21%.)

In short, Fortress/MGIF appears to have done quite some legwork behind the scenes to make this offer possible, and at first glance it seems like an attractive one: creditors who opt for early payouts get almost all of the benefit with a near-best-case payout rate, less waiting, and zero risk from CoinLab. Creditors who take the red pill and stay in the game face a significantly longer wait (although there may be interim payouts), only a slight potential upside, and a risk (however small) of an ultimately lower payout.

Overall, this should be positive news for MtGox creditors. No thanks to CoinLab.